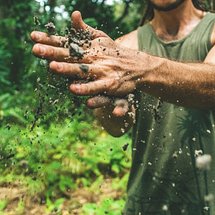 Local Food Drives The Auxiliary Unit tries to hold two Food Drives a year in conjunction with the local grocery store’s case sale. We have found that there’s a lot more given during these timeframes. All proceeds and cash collected go to the local Lolo Food Bank which is open on the 1st and 3rd Wednesday of each month located at the Lolo Community Center. We’ve received excellent feedback from the director stating how much the donations mean to the program and assisting with the ever constant need in the community.

Post 135 Victory Garden, members of the post who garden donate their extra produce to the Lolo Food Bank.

The Montana American Legion White Cross Highway Fatality Marker Program began in 1953. The unique idea of marking fatal traffic accident sites with a white cross was the brain child of Floyd Eaheart, a member of the American Legion Hellgate Post #27, Missoula, Montana; after six lives were lost in the Missoula area over the 1952 Labor Day Holiday. The safety program started out as a county and later district project for the Missoula American Legion Post. However, the idea was so good that it was soon adopted as a statewide program.

Our post has teamed up with local schools to award cash prizes to the top three Essays and Speeches given by middle school and high school students. The winners are eligable for other prizes on the state and even the national level.

Sponsored by The American Legion and The American Legion Auxiliary, respectively, Posts and Units sponsor High School students to attend a week long "camp" to learn and better understand the constitution and how our government works with a mock legislature. They learn how to write and pass bills and other legislation.

Serving Veterans, their families and their communities